The following post was drafted in 2014. A lot has happened since then.

Maybe I'll find the focus to catch you up on the last 5 years. In the meantime, this will have to suffice as I am exhausted from trying to recall email addresses and passwords associated with this blog.

***
I have no idea where the past year has gone.

They say time flies when you are having fun. But I wouldn't exactly call the last 12 months... FUN. It's been a challenging adventure for sure, and shows no signs of letting up.

Cinderella is now 17 and a senior in high school. She was hospitalized a third time over the Christmas holiday, at her request... vis a vis a note which I found on my desk one Friday morning after she had already left for school:

I immediately texted her at school. She was ok. She was grateful and relieved to know that she had been heard and I had her back...as I always have. We would talk more when she came home after school.

I called the National Suicide Hotline.
I called her therapist.
I called Prince Charming.

All agreed she was not in any immediate danger. The note was her way of opening a dialogue. And talk, we did. I asked all the usual questions: How long have you felt this way? What triggered it? What have you been doing to cope? Did it come up in your weekly sessions with your therapist?

She felt she needed to go back into the hospital. Spending the weekend with Prince Charming was important so she could go shopping for gifts for her family. It was a week before Christmas. She knew she would spend it in the hospital so she wanted to make sure her gifts would be under our trees.

Her hospital stay was an absolute CLUSTERFUCK of mismanagement by an inexperienced social worker who was put in charge of her case.  In the interest of brevity I'll spare you the details other than to say there were MANY phone calls between myself, Prince Charming, the social worker and Director of the hospital to thwart an early discharge the day AFTER Christmas. There may have been some yelling involved. And a letter. And numerous apologies from Administrative staff assuring us that while there were no do-overs for Cinderella, steps would be taken to ensure this doesn't happen again to another family.

Cinderella spent two weeks in the hospital, and another two weeks in a day program in an effort to solidify the skills she had learned and give her greater chances for a success re-entry back into normal life. In the months following, she has stumbled a bit. And recovered. And stumbled a bit more. But I am happy to report amidst the minor setbacks she has successfully ended a toxic relationship, attended an event for accepted students to one of her chosen colleges and registered for classes/inquired about housing/researched financial aid all on her own (well, ok that involved some gentle pushing on my part) and has maintained an 80+ average in ALL of her classes.

(And yes, I still sleep with all of the OTC drugs, razors and knives in my bedroom.)
Proclaimed by Wicked Stepmom at 10:17 PM 3 comments: 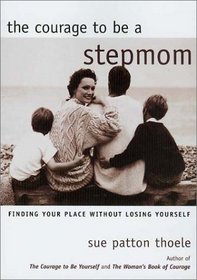 The Courage to Be a Stepmom, by Sue Patton Thoele was a book recommended to me many years ago when I first started this blog. I will admit to buying it, and reading *some* of it. I never finished it, but what I did read was pure genius and offered me just the right amount of insight I needed to trudge through the feelings I was experiencing at the time - the feelings expressed in this post, which continues to get feedback and comments more than any other post...five years after it was first published.

So... you want to know how I've done it? Try this book. And if you have other recommendations for the small community of fellow Stepmoms that I am blessed to have here, please share in the comments section.

Proclaimed by Wicked Stepmom at 8:25 AM 17 comments:

Cinderella is home (YAY!)...with bright shiny new meds and a 60 year old psychiatrist with tattoos, piercings and gauges in his ears (Eww...but, KEWL!).

My butterfly has now faded and I am hopeful that I won't have to draw another one.

(HOWEVER, I am considering getting one TATTOO'd on my arm for her. I owe her a tattoo after getting an ambigram for her brother and sister after Prince Charming and I separated, and the symbolism of TRANSFORMATION seems fitting.)

In the meantime, I have hidden all of the Tylenol, Advil, cold medications and razors in the house.

This is normal, right? A new normal that the parent of a suicidal teen should expect?

Proclaimed by Wicked Stepmom at 6:00 AM 9 comments:

Last week, I drew a butterfly on my arm in support of Cinderella, courtesy of The Butterfly Project. 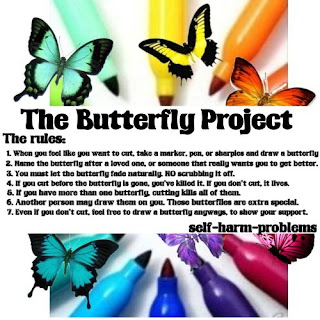 While it may not have stopped her from cutting THIS TIME, I believe it did reinforce the message of my unwavering support of her struggles...which is what ultimately allowed her to confide that she tried to commit suicide days earlier. And why she was brave enough to tell me that SHE NEEDED HELP and wanted to be hospitalized because she felt she was at risk of harming herself even more.

There is no ONE solution to the issues of teen depression, suicide and self-harming behaviors. The Butterfly Project is just one resource. All we can do as parents is to remain diligent in our research, finding new ways of educating ourselves and our teens, loving them IN SPITE OF their struggles. Of helping them to take flight ABOVE their challenges.

If you, or someone you know, is carving, scratching or cutting to cope with their INTERNAL pain... please know there is support and help available. Or you could try calling an information only line at 1-800-DONT-CUT.

And then maybe, draw a butterfly or two on your own arm as a show of support. 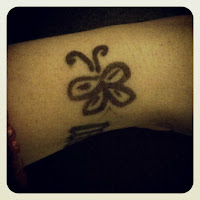 Proclaimed by Wicked Stepmom at 6:00 AM 7 comments:

We're our own dragons as well as our own heroes, and we have to rescue ourselves from ourselves. -Tom Robbins

I could attempt to write a more eloquent blog post, but there is no poetic way of discussing depression, self-mutilation and attempted suicide in teens.

Cinderella is back in the hospital, people.

She's struggling as so many teens (and adults) do. Trying to slay her own dragons. These dragons have resulted in two failed attempts at OD'ing  in the last week and NEW battle wounds along her arms and legs.

In the past four months since moving in with me, there is NO DOUBT that Cinderella has grown stronger. So much stronger than she was here and here. I'm infinitely proud of my big girl - of her strength, her grace and her hard-earned wisdom about life. I've tried reminding her that she's not alone and make a home for her where she can feel safe to just... BE.

But it's just not enough. Not yet. Not completely. The dragons keep telling Cinderella LIES. Lies that have her believing she's not worthy and unlovable and carving her own scarlet letters of self-loathing into her beautiful skin.

Cinderella is in a safe place now where she can gain even more strength to slay her dragons and rescue herself FROM herself. While driving home from visiting her last night, this song came on the radio...it's sort of become the soundtrack to this new chapter in our fairytale...it's so poignantly PERFECT:


I have no doubt that she will make it. I have to believe that, for the alternative is...well, NOT AN OPTION. Not in this fairytale.

In the meantime, I continue to surround her with love, encouragement, positive thinking and reminders that she is NOT ALONE. She and I are so very blessed to have friends who love her as much as I do and who do amazing things like devote a blog post to her. Please read it, and then follow the links to The Blogess' post on National Suicide Prevention Day. And then, please, SHARE IT so we can help others to slay their own dragons.

Proclaimed by Wicked Stepmom at 9:03 AM 5 comments:

Wicked Stepmom: Second Wife and then Ex-Wife to PrinceCharming. BioMom to Hansel & Gretel. Custodial Stepmom & legal guardian to Cinderella (as of 2012).